A high-pressure seal is usually used to restrict fluid to pressures above 5,000 psi. Below these pressures, standard electrically charged polyurethane lip seals and U-seals can function satisfactorily without special specifications. On top of them, you need some kind of special seal.

To be effective, seals must perform three basic functions. They must be

The sealing material must conform to the irregularity of the metal surface to prevent the passage of fluid; (b) In order to accommodate the change in clearance size, seals must be rapidly expanded or compressed to accommodate the change in size; (c) In order to resist being forced into the extrusion clearance, the seals must be of sufficient modulus and hardness to withstand the shear stress caused by the system pressure. 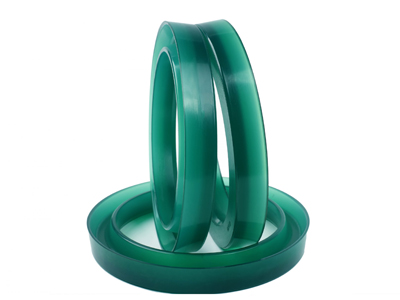 Seal – Seal components must be tightly fitted to the microscopic irregularities of the mating surface (e.g., rod to seal groove and/or piston groove to cylinder hole) to prevent pressure fluid from penetrating or passing through.

Adapt to clearance changes – Seals must be flexible enough to accommodate changes in the distance between mating surfaces during cylinder stroke. The gap may change size due to changes in the roundness and diameter of cylindrical parts. Clearances can also change in size in response to lateral loads. As the gap size changes, the seal must match the size change to maintain compression sealing force against adjacent mating surfaces.

The elastic material must also be sealed while accommodating dimensional changes caused by manufacturing tolerances, lateral loads, and cylinder deformations under pressure. Understand that in general, the tightness will improve as the fluid pressure increases. The system pressure on the sealing surface attempts an axial compression seal. This compression forces the seal closer into the gland and helps improve the seal’s consistency with the metal surface it contacts.

If the gap increases during the stroke, the elasticity of the compressed elastic seal causes it to expand radially and maintain sealing force against the metal surface. As the clearance increases, the system pressure is combined with the seal elasticity to increase the compression seal force. In general, as the pressure of the system increases, so does the sealing force and the resulting sealing effect if the seal is designed correctly.

As the system fluid pressure increases, the O-ring is gradually forced into the squeeze gap (a) through (b). Finally, (c), the physical limit of the sealing material has been exceeded.

When handling a charged polyurethane lip seal or U-cup with a hardness of 90 at room temperature, the seal appears to be made of a very hard, tough material. It requires carefully designed experiments and/or sophisticated computer simulations to visualize this seal in a hydraulic cylinder at normal operating temperatures and pressures. Seal cross-sections deform significantly at pressures as low as 600 psi of 70 NBR and 1,500 psi of 90 polyurethane. It changes shape almost instantaneously in response to changes in pressure peaks or gap sizes. Literally, the seal becomes a circular ball in the seal gland.

Our company has seal components for sale, welcome to consult!